The arXiv this morning offered another interesting paper, this time by Gia Dvali and Cesar Gomez. These two authors, sometimes with collaborators, have written a number of related papers over the last few years regarding black holes and quantum gravity. Although interested, I'm afraid I have not taken the time to properly understand their papers, but here is a synopsis of a couple of the relevant ones as I understand them:


I am uneasy about the ideas contained in paper 2. One concern is the following: a Bose-Einstein condensate, consisting of some fixed number of particles, is not much like a classical field configuration. Every undergraduate knows about coherent states of the harmonic oscillator, which are given by eigenstates of the annihilation operator — about as far as one can get from a state containing a fixed number of particles. Nevertheless, these are the 'most classical' states. Or take something less trivial: a widely separated kink and anti-kink (so we remain in the topologically-trivial sector) in $\lambda\phi^4$ theory in two spacetime dimensions. Can this sensibly be treated as some bound state of $\phi$ quanta? Even if it can, does the same reasoning apply to gravitons, considering the rather dramatic effects which a strong gravitational field has on spacetime (which is a fixed background for other field theories)? Perhaps these concerns are unimportant, and I am willing to ascribe them to my own ignorance for now, and move on to discussing the new paper.

The topic of the new paper is black hole 'hair'. It is a theorem in classical four-dimensional general relativity that a static black hole solution is fully specified by its mass, angular momentum, and gauge charges. In particular, if a black hole formed from material carrying some global charge (like baryon number), there is no way to tell: "black holes have no hair". This may not immediately seem very profound, but it becomes so once we take Hawking radiation into account. Hawking's calculation shows that in the absence of gauge charge, the decay of a black hole treats particles and their anti-particles completely symmetrically; even if a black hole was made entirely of baryons, it will radiate an equal number of baryons and anti-baryons. The conclusion usually drawn from this line of reasoning is that black holes/quantum gravity violate all global symmetries. See this lovely paper by Banks and Seiberg for a detailed discussion. 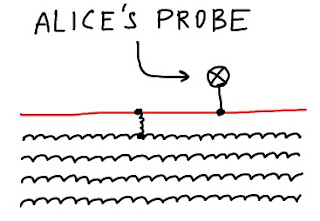 Dvali and Gomez protest the above very strongly. The following will all be paraphrased, but I believe I have retained the meaning of the paper. We are asked to consider a black hole carrying (say) one unit of some global charge, which in a fit of whimsy I will call happiness. This is apparently represented by the condensate/black hole now consisting of $N$ gravitons and one happyon (a particle with unit happiness). Already, this seems very strange to me, even assuming that the overall picture of paper 2 is correct. But let us press on. How can one measure this one unit of happiness? Obviously, this requires interacting with the black hole, using some probe which interacts with the happyon. In the paper, the ubiquitous 'Alice' is the one doing the measurement, represented by the diagram shown here (quaint, isn't it?). The red line is the happyon, while the wiggly lines are gravitons.

The chance of the probe interacting with the happyon is $\alpha\frac{1}{N}$ times that of interacting with a graviton, where $\alpha$ represents the strength of the interaction with the probe. Generalising, we conclude that the rate of interactions of a black hole which reveal its happiness $H$ are suppressed by $\alpha\frac{H}{N}$ relative to the purely gravitational interactions, and this applies to the radiation too. When $H \sim N$, the charge of the black hole becomes very apparent. This effect is supposedly missed by the traditional reasoning, since it is usually supposed that Hawking's calculation holds down to some fixed critical mass $M_c$, whereas here we see that it only holds down to the $H$-dependent value $M_c(H) \sim \sqrt{H}M_P$ (remember $N \sim M^2$). Similarly, the new argument shows that even global charges are conserved during black hole formation and evaporation.

I believe I have represented their argument fairly, albeit briefly, and I just don't think it can be taken seriously. Take, for example, the thought experiment of Alice measuring the black hole's happiness. By assumption, there is no gauge field associated with happiness, so the measurement can only be made using other interactions. But the black hole might be made up of any combination of particles we choose, and in particular, we could choose some that, as far as Alice's probe is concerned, completely mimic the interactions of the happyon, but which carry no happiness.

To sum up, it seems that Dvali and Gomez have simply stipulated that particles maintain their identity when they fall into a black hole. Their conclusions follow quite simply, but the assumption is questionable, to say the least.

You can use LaTeX code in your comments simply by enclosing it in dollar ($) signs.