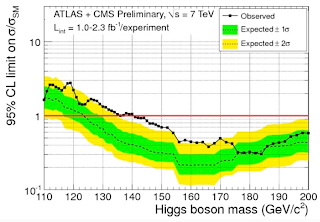 Algebraic geometry is a subject I have had quite a lot of use for in recent years, in my work on string compactifications, and I have come to love it, although I am still very much a novice. It has a reputation for being difficult and very abstract, and I think modern algebraic geometry thoroughly deserves this. But the roots of the subject are simple enough: it is a systematic study of the solutions of polynomial equations (this only really becomes interesting in more than one variable, where the solution sets can form interesting geometric spaces). On the other hand, thanks to the 'GAGA' principle, fairly elementary techniques of algebraic geometry are capable of solving complicated analytic problems arising in complex geometry.

To show you that it's not all so scary, I want to present an example of something quite familiar to physicists, and explain how it corresponds to a common operation in algebraic geometry.

Until now I have avoided putting any mathematical expressions into my posts, mainly because I couldn't find a nice way to go about it. But a little more searching has turned up a script which, among other things, converts simple LaTeX expressions into MathML; it is called ASCIIMathML, and I learned about it here, and its webpage is here.

Hmm… It worked perfectly for me when I tested it, but now I am getting mixed results with Blogger's preview function. Here is a test: I would like to be able to include pretty equations like $\lim_{x \to 0} \frac{\sin(x)}{x} = 1$. Please let me know in the comments whether that is displayed correctly (note that it may initially appear as LaTeX code, but should be converted within a second or two).

Edit: For reasons I don't quite understand, ASCIIMathML wouldn't play nice (perhaps this had something to do with me storing the javascript file on my university webpage?). However, following a suggestion by Anna in the comments, formulae are now being provided by MathJax, and seem to be working. Thanks Anna!

For my own perverse reasons, I recently felt the need to explore, in as intimate a way as possible, the Majorana-Weyl spinors in eight Euclidean dimensions (if you don't know what any of this means, I will give a quick heuristic explanation of spinors below). Not being able to find a reference in which these were described in an appropriately explicit way, I set about the task myself. Over the last couple of days I have spent some time writing up my notes on building spinor representations, starting in dimension two and working up to eight. None of this is original, of course, but it's a very pretty story, and I enjoyed doing it. In case this might be of use or interest to anybody else, I have put the notes on my website, here. They are towards the bottom, with a few other sets of notes (the new ones on spinors are probably the most complete and useful of what I have there). Any criticism/comments/suggestions are welcome in the comments here.

So for the uninitiated, what are spinors anyway? Let's start with something a bit simpler: vectors. A vector can be thought of geometrically as an arrow; it is characterised by its length and the direction in which it points.

CP violation at the LHC

Even if you have only a passing interest in particle physics, you have probably heard by now that the LHC has just produced a welcome surprise, following months of results which have merely improved the bounds on hypothetical new physics.

So has the Higgs boson finally been hunted down? Have gluinos or squarks finally shown up, providing long-awaited evidence for supersymmetry? Has a monstrous black hole been created, which will destroy us all over the course of the coming days? Not quite (and if you thought that last one was a realistic option, you have been badly misled!). Direct searches for the Higgs, or superpartners, or other new particles are largely the domain of two different experiments at the LHC — the CMS and ATLAS detectors. Instead, this new result comes from LHC-b, an experiment which has so far seen far less of the limelight. Mat Charles, from right here at Oxford, made the announcement in a talk at the HCP 2011 conference yesterday, and was kind enough to give us the same talk today in a local seminar.

Here comes some of that shameless self-promotion I promised! On Friday, I had a new paper come out on the arXiv, written with my friend and collaborator Matt McCullough, who is now a postdoc at MIT. We present a mechanism to explain the observed tiny but non-zero neutrino masses, in the context of supersymmetric models which preserve an R-symmetry at the electroweak scale.

It is well known that when supergravity is taken into account, R-symmetry must be broken in order to cancel the large cosmological constant generated by supersymmetry breaking. This can happen well below the electroweak scale, leaving a good approximate R-symmetry, and all the advantages that brings (see below). But in the scenario we present, the R-symmetry is what forbids electroweak-scale Dirac neutrino masses, so when it is broken, Dirac neutrino masses are naturally generated at a much smaller scale.

The latest xkcd comic led me to read about the Kardashev scale on Wikipedia, which is one of these wonderfully pointless ideas (such as the Drake equation) dreamt up by people who I'm sure, like me, read a lot of science fiction as children, and are consequently fascinated by the idea of extra-terrestrial life and ultra-advanced civilisations. But that's not what I want to discuss here. The article mentions anti-matter, and this is a concept which is often misunderstood by non-physicists.

So what is anti-matter? Our world is made up of particles — the stuff around you is made of atoms, which in turn are made up of electrons and atomic nuclei. Electrons seem to be pointlike, while the nuclei are ultimately made up of other seemingly pointlike particles called quarks and gluons. Quantum field theory, which represents our current best understanding of how the universe works on the fundamental level, tells us that for every type of particle, there is also an anti-particle. It has exactly the same mass as its corresponding particle, and the same spin (a number which measures how fast a particle rotates, in a technical, quantum mechanics sense!), but the opposite charge. For example an anti-electron, which is usally called a 'positron', is identical to an electron in every respect, but has a positive electric charge instead of a negative one. A similar statement holds for all anti-particles — they are exactly the same as the corresponding particle, except for their charge. Note that we actually know about more types of charge than just ordinary electric charge, such as the 'charge' carried by quarks which holds them together to form protons and neutrons. All of these charges are reversed for an anti-particle.

After years of deriving both information and entertainment from various blogs, I have finally decided to start my own. By doing so, I am also living up to a commitment I made in the application for a grant which I have now held for over a year…

I intend to blog about anything I find interesting in the broad categories of physics and mathematics, as well as my own activities which relate to them. In practice, I imagine this will mean lots of posts about recent news in particle physics, and shameless plugs for my own work. From time to time I might write something semi-technical about a well-known topic in physics or maths which I have recently found interesting.

For now, I leave you with some names which I wrote down during the one-man brainstorming session which ultimately led to this blog being called "Cross Sections":

"Anomalous Diversion" — Another tenuous pun, this time on the "anomalous divergence", in a quantum field theory, of a classically-conserved current.

"Lie Groupie" — Sadly, I suppose this is also a pun, this time implying that I am infatuated by Sophus Lie, the groups which bear his name, or both.


So as well as the three meanings of "cross sections" (one for physicists, one for mathematicians, and the other as a metaphor for this blog), which I thought made it the perfect choice, it was the only idea I had which wasn't a pun…
Posted by Rhys at 21:20 2 comments: